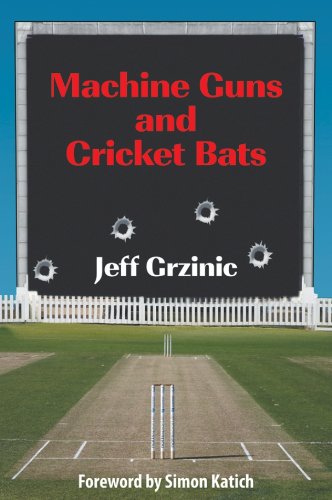 Synopsis:
Machine Guns and Cricket Bats is a behind-the-scenes look into the sometimes dangerous and always entertaining world of international cricket.

If you’ve ever wondered what destiny does when it’s not arranging wars, scandals and marriages, ask author Jeff Grzinic. As a toddler in Western Australia, Jeff was involved in a serious car accident, and spent decades recovering from his injuries before becoming an international cricketer – for a country that didn’t even exist when he was born!

Jeff's story of the battles of attrition in life from behind the crease makes an enchanting and intriguing read for fans of life – not just cricket. Competing in a world of sub-elite international cricket, the rewards are somewhat esoteric and the experiences closer to the bone. His humour leads readers through the underbelly of European cricket, including the cheap motels, spectacular sights, memorable food, and most importantly, the people.

About the Author:
Australian born and raised of Croatian parents, Jeff Grzinic has been a passionate cricketer since he was old enough to swing a bat. “Although I was never going to play for Australia due to the injuries sustained in a serious car accident, I certainly made the most of the opportunities presented to me and became the best cricketer I could be. Just when I thought my chances of playing higher level cricket had passed me by, a phone call changed my life forever, and I ended up playing international cricket!”